Today Davey & I headed out with the intention of heading high up into Cwm Cneifion and looking for something grade III ish to start off our winter season,.Possibly Tower Rib, or if we were feeling unusually brave Golden Girl Ali.
Although reports from the weekend were of a big thaw, I hoped that we could find something in condition after the colder temps last night. However on driving up the A5, Cwm Cneifion although certainly having some snow cover looked pretty black in the rocky areas including Clogwyn Ddu.
Looking over to the easy gully lines of Y Garn, we could see they looked complete, and Y Garn in general just looked more wintery! So, we ditched our rope & climbing hardware in Davey's lovely T5 camper, just took axes & crampons and headed up.
Snow cover starts around Llyn Clyd, although it is extremely soft and boggy. (as usual) We could see that Banana Gully was complete, so headed up, stopping where the gully narrows by the small crags on the left to don crampons. So to the snow conditions: the first half of the gully from this point was great if you stuck to the 3 or 4 sets of steps already kicked in the snow, rock hard in fact. However venturing a few feet to the right or left of these steps, the snow had a hard crust, but soft underneath resulting in wading knee deep. But the second half (approx top 70m) the snow was excellent neve right across the gully, and kicking steps and front pointing was possible.
We decended via A Gully, which was much the same story snow condition wise as Banana Gully. I then went to have a peek between the buttresses into C Gully, but could clearly see that there was not complete snow cover, and the 'step' was bare turf which would most certainly not have been frozen, so we backed off that.
On returning back to Ogwen carpark we spoke to a lad (blue camper van next to us, hello!) who had been up into Cwm Cneifion, and reported snow conditions high in the cwm were actually very good, and had done Hidden Gully were he said it was 'bomber neve all the way'. 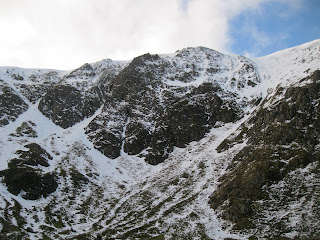 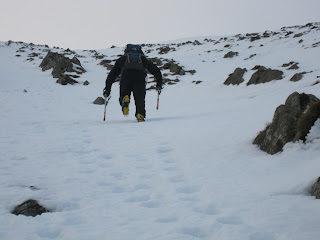 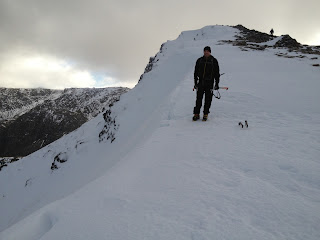 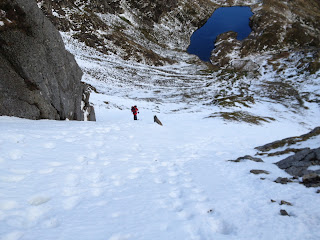 Me towards the bottom of A Gully