A quick report on Cwm Lloer from yesterday. A 'bluebird' day if ever i've seen one, cloudless skies, not a breath of wind, and temperatures below freezing all day! Got into Cwm Lloer at 9am where there is good snow cover from 700m upwards, so headed to Broad Gully to start. Super neve all the way allowing you to front point and dagger all your way up if you wanted to avoid the bucket steps that are also in situ. Having done Broad I cam down the Headwall which is definitely skiable at the moment for the brave, and went into Y Gully Right-Hand. Again the neve was bomber but I have to say this route looks better from the bottom than it actually is! Ended the day doing Y Gully Left-Hand which proved to be a significantly more testing route. The first step had running water and was incomplete but was avoidable using the rib on the right before entering back into the gully. To avoid the second step I took a rightward trending shallow gully which culminated in a steep chimney. As the gully steepened the snow became less reliable and more sugary making for a couple of spicy moves in the chimney to reach the top. A great climb but probably III, 3 in current condition. Apart from the gullies nothing else in the Cwm was in condition with no riming on the cliffs, and very little ice forming.

A few pics from the day attached. 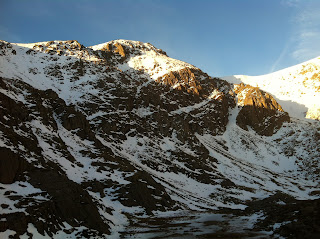 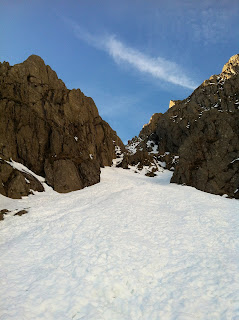 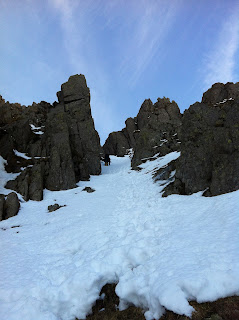