I know its probably largely academic now considering what has happened today, but you maybe interested in what Dave and I did yesterday. I'm saying this though, but on a trip from Betws just now there was fresh snow down to about 600 metres so maybe freezing level was a little lower than anticipated for today. Anyway we went up to Clogwyn Y Garnedd via the Pyg in what was a truely stella day weatherwise. We decided to start off with Snakebite (III,3), I think in the end we did a mixture of Snakebite and Snakebite Direct. Neve was great, but climbing was delicate in places, a little sugary, but you could avoid vegetation with careful climbing. Topped out by 1300 so plenty of time for another route after a quick lunch. Downclimbed a solid End Gully and decided on Cave Gully (III,4) for our 2nd route. The crux below the cave was pretty delicate with snow ice and ice but again with careful climbing it was great fun. Solid neve both below and above the crux. A tricky exit, from the cave, onto some ice (which may have even taken a screw!), provided added interest. Worth noting there are few runners below the crux but very few above the cave (two that I found/used). There were plenty of folk out but never too crowded as they were spread about the face. We saw teams on the Trinities, Ladies and Cave, other stuff was probably done too. Maybe some of it will survive until the next cold spell. Couple pics, 1) Cave Gully, 2) Trinities - End Gully 3) Dave at top of Snakebite 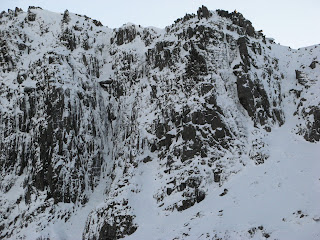 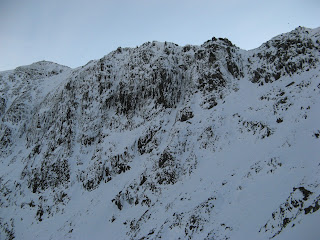 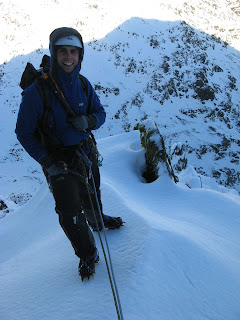