Just had an email from Carl who was out today on Bristly Ridge: Hi Andy I ventured today up Bristly Ridge and down Gribin. Paths iced up below Cwm Bochlwyd when walking in. Bristly Ridge was covered in powder but nothing consolidated which made for tricky climbing in places. Because of this I flanked the first part of it, tackling an easier gully to the left to gain the ridge. Forecast was spot on, very windy and moderate snow from about 1100. Forgot to take goggles so my face and eyes had a good exfoliation! Travel was hard around the back of Castell y Gwynt due to waist deep powder in places...there was alot of snow moving around up there. Looked at Easy Gully in Cwm Cneifion but decided to come down via Gribin as the Gully was corniced and possibly loaded in the lee of the wind. Clogwyn Ddu looked pretty white and rimed up. Snowing pretty hard on way down until about 600 metres when it turned to rain. Didn't see much in the way of frozen turf. Does look colder after the weekend so maybe things may shape up better by the end on next week. Couple of pics which gives a flavour of it: 1. just after the difficult step on Bristly Ridge 2&3. Glyder plateau 4. Clogwyn Ddu and Hidden Gully. 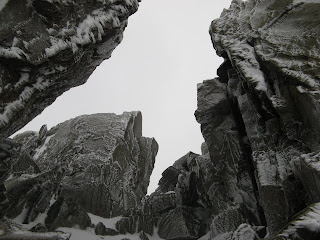 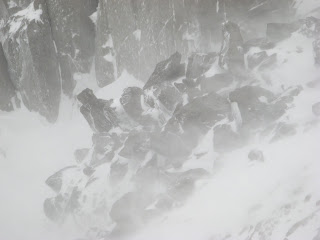 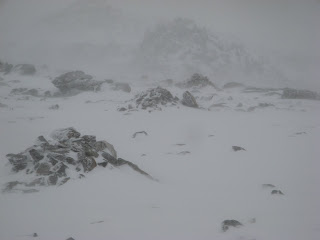 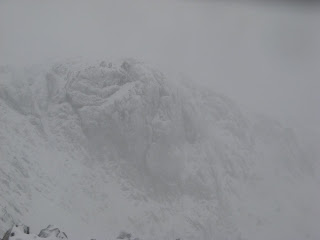