I have been out for a few hours today (a bit later than expected, sorry Al!) on the gullies of Y Garn. I opted for the following combination: Up C Gully, down A Gully, up B Gully, then down Banana Gully. Snow conditions were good, certainly for at least the top 100m or so with plenty of frozen turf around.
Highlights of my day were on C & B gullies. C Gully provided good neve from where the gully narrows between the buttresses, with patches of decent ice. There was a couple of sections of bare ground where it steepens but frozen turf & ice made up for the lack of snow there. B Gully provided two interesting obstacles today. The first was the boulder at around a third of the way up, which is usually banked up with snow, maybe just leaving a slight steepening of the gully. Today though it was an 8 foot bare boulder blocking the way! It is possible to skirt around it to the right, but if you want to tackle it direct as I did it is good mixed fun. Get your left axe up as high as you can into the crack & lift your right foot up onto the small ledge which is aroung knee height. You can then push/pull up to standing & hook both your axes right over the top of the boulder out of view into frozen turf. Its then just a case of going for it. (It may also depend if you are a lanky tall git like me!). The next obstacle is the cornice directly at the top of B Gully. The snow towards the top of the gully becomes rock hard, and the angle increases sharply to an almost vertical 12 foot finish (that may be a slight exageration!), where front pointing is essential. Climb it direct & be rewarded with a lovely top out as you hook your axes over its lip, and pull yourself to safety. but DO NOT SLIP at this point, as you would go a long way!! Alternatively traverse right onto an easier angle for a safer exit.
It was cold on the tops today, around -5c, so with the low temperatures which are forecast for tonight, those gullies which depend on decent snow should be nice & hard tomorrow. 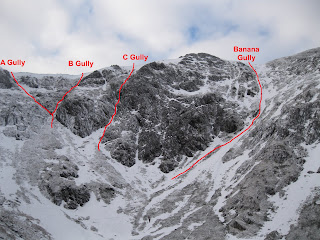 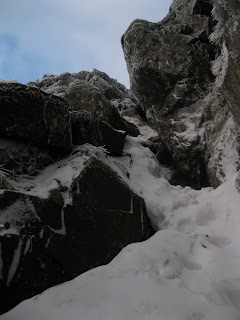 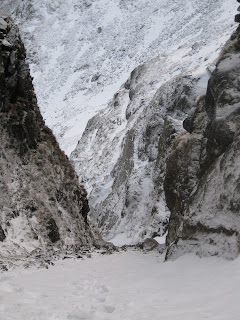 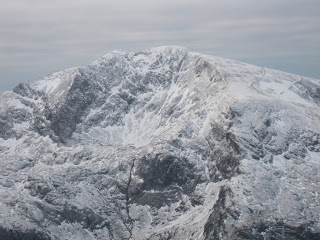