The following info is from Misha & is also on the UKC Welsh Winter Condition thread
A couple of his photos below too.

'Hidden Gully on Clogwyn Ddu in easy condition for the grade. Good neve most of the way up with little bits of ice towards the top.

From a distance, it didn't look like there was any ice on P1 of Clogwyn LH. However later spoke to a team who said they had gone up the approach gully to have a look and thought the ice was thin and required mixed climbing up the rock to the right. They didn't fancy that, so abbed into the start of the last pitch and found good ice there.

Pretty much all the routes in Cwm Cneifion up to III are doable but some are thin in places (see comments re the ice step in Tower Gully - I managed to pass it in descent but the ice was quite brittle, with largish chunks falling off). From a distance, Clogwyn RH looked like turf/mixed climbing towards the bottom but snow and a bit of ice higher up.

Parsley Fern LH has a bit of ice (II/III depending on the line chosen), which was reasonable but dinnerplating in places. However the ice section is pretty short, so I'd say you get more bang for your buck (or axe placements for your approach slog) on Tower Slabs in Cwm Cneifion. 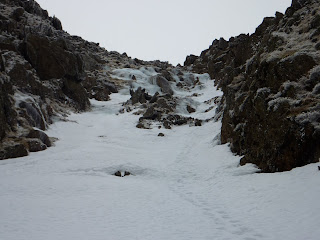 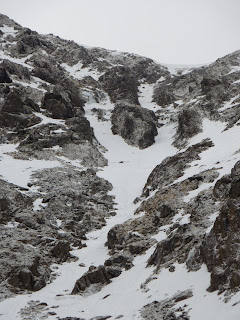