I have had quite a few emails in the last week & noticed a few questions on UKC regarding any snow which may be left in the higher gullies. So today I decided to head down the A55 and have a wee look. The forecast for the day according to MWIS, MetOffice, Snowforecast.com & MetCheck ALL stated very clearly that today would be a day with fantastic visibility, 90% chance of cloud free summits, sunny & clear skies. That sounded too good to miss, so off I went heading up Cwm Glas Ridge which leads right to the summit of Carnedd Ugain. My plan was to get some great photos of Cwm Glas area gullies & the Trinity Face to see how much if any snow was left in the popular gully climbs. BUT as you will see from the pics below this was not to be, due to thick cloud cover from around the 700m mark. So absolutely no stunning views as promised! However I can report that the ground is frozen solid from around the 800-850 mark, but the gullies are stripped clean. From the top of Cwm Glas Ridge I could see (now & again when vis was more than 10m!!) that all snow is gone from Cwm Glas, with only the odd patch left where cornices have been at the top of Parsley Fern & adjacent gullies. Nothing else. It is all gone. There was no snow at all on top of Carnedd Ugain, but it was very cold with rock hard ground. As far as the Trinity Face goes, again I couldn't get a photo of any use (see below), but the same story seemed to be true from the odd bit I could make out.
So all round bad news regarding any hopes you may have had of the nest few cold days refreezing remaing snow, as it has all gone. It is going to take a big dump of snow & a freeze/thaw cycle, which unfortunately is not forecast for at least the next week or so.
----------------------------------------------------
Pic 1: A great view of Cwm Glas (!!)
Pic 2: Another great viw, this time of the Trinity Face (!!)
Pic 3: Summit Carnedd Ugain 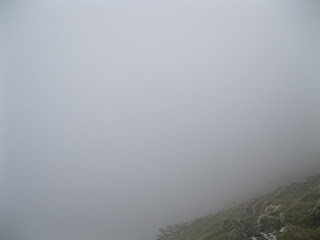 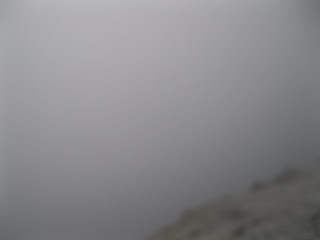