Did Eastern Gully on the Black Ladders today. The walk in was interesting weather starting with drizzle, turning to hail and then quite heavy snow by the time I reached the crag. So route location was a challenge but I worked out where it was in the end. I skipped the direct start on the ice and traversed in from the right. There was ice on the direct start but it was thin and didn't have a proper look as to whether it would have been climbable or not. There was a team that started Pyramid on the second pitch. There was ice on the first pitch of Pyramid but it didn't look very well bonded to the rock. Eastern was great with good neve which became more solid the higher I got. Dusting of powder over top of it. There were two chockstone problems which were moves of III. I belayed myself over both of the problems (slung spike on first and a slung snow bollard on the second), the second holding a little ice. Pretty windy up top, with plenty of spindrift just before the top out, but on the way down the visibility cleared and had some nice views of the crag on the way home. I met Hugh Gilbert and Nick on the way down, haven't met Hugh but recognised him from his blog picture! They were the team on Pyramid and they said it was great. We also spoke to someone on the way down who had done Icefall Gully. Seemed to be plenty to go at in the Ladders. 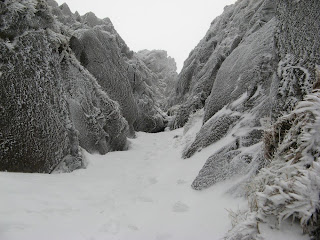 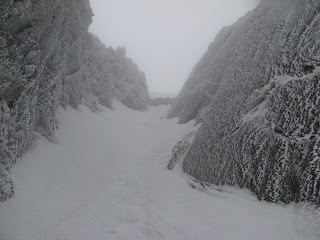 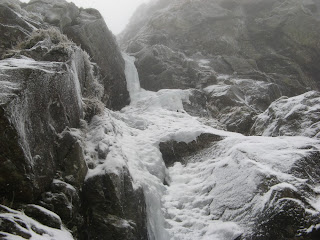 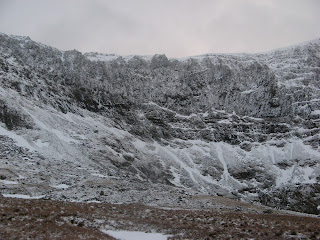