Having (obsessively) watched the forecasts for the last few days I decided that today might be a good day to head out & see what was frozen. My initial objectives for the day were 2 gully lines high on Glyder Fawr: High Pasture & Oblique Gully.
I had hoped that Introductory Gully up the right hand side of Idwal Slabs might be in condition, but it wasn't. However the closer I got to Idwal Stream the more climbeable it looked. And on close inspection it certainly was good to go. Plenty of fat ice, although tonnes of water also. I climbed the first 3 or so pitches until it levels out a bit. Well worthwhile & I imagine it will see plenty of ascents this weekend, although wether it will take decent ice screw placements is debateable!
I then traversed across left onto the flanks of Glyder Fawr to have a look at High Pasture. The turf on High Pasture was certainly rock hard, but the lack of any snow or ice whatsoever did not inspire me & I decided not to bother. Also from this point on the crag I could see some tempting looking ice over to the left in Oblique Gully, so that is where I headed. Now the new guidebook gives Oblique Gully a grade of II 2/3 although a sentence in the intro to Glyder Fawr does say something like 'grades could be higher in lean conditions'. Well never a truer sentence was written as it turns out!
Today Oblique Gully was a mix of ice smeared rock, rock hard turf & vegetation, and bare rock. I encountered the first major obstacle early on, it was a 9 foot high cave with blank ice smeared walls on either side. In fatter conditions this must bank out with snow, and the ice must fatten up to enable climbing, but in todays conditions it would have been more like grade V/VI terrain and I refrained. The only way up was to step out left, onto the exposed buttress which is made up of ice smeared slabe & frozen turf. In my estimation this went at around III/IV. Once back in the gully (which was no mean feat!) it was back to approx grade III terrain. Now the new guide says that when the gully splite into two, it is best to take the right hand option, which takes you up to a chimney which is 'sporty' in lean conditions. This was true. It certainly was sporty! In todays conditions I would certainly have to put Oblique Gully at the upper end of grade III, & more realistically III/IV. DO NOT GO THERE IF YOU ARE LOOKING FOR A GRADE II ROUTE AT THE MOMENT!

From what I saw today although the other Idwal ice routes are starting to form none looked complete. Also looking accross to Y Garn, there are no complete gully lines in any way, just a dusting of fresh snow. Also Cwm Cneifion is much the same story with Easy Route on the headwall (& possibly Corner Gully I/II) being the only snow lines. Tower Slabs has not formed.
-------------------------------------
Pic 1: Idwal this morning
Pic 2: A pretty bare Y Garn
Pic 3: An enticing looking Idwal Stream
Pic 4: Idwal Stream 1st pitch
Pic 5: Idwal Stream 2nd pitch
Pic 6: Idwal Stream 3rd pitch
Pic 7: Base of Oblique Gully
Pic 8: The 'impassable cave'!
Pic 9: Higher up in the gully
Pic 10: A bare looking Cwm Cneifion 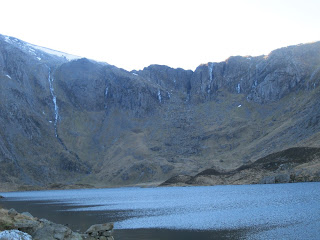 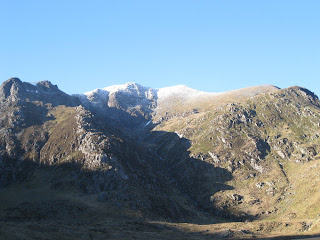 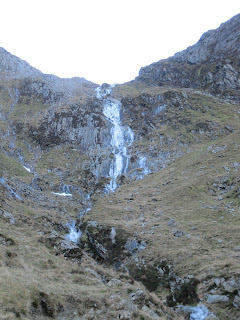 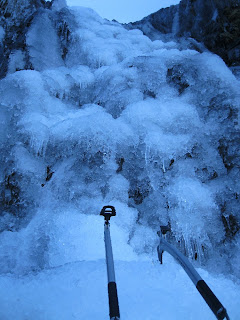 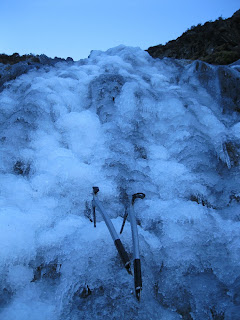 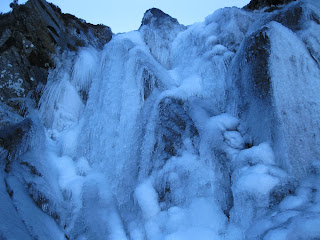 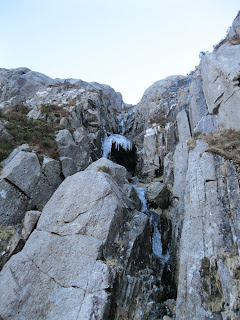 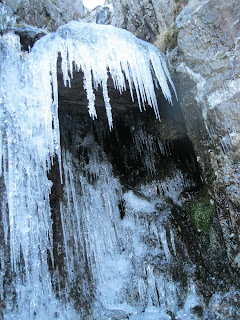 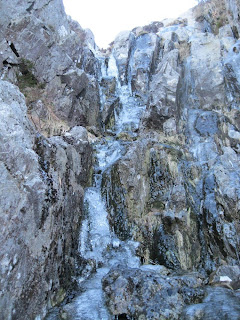 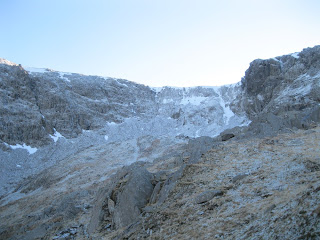