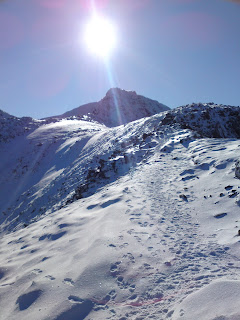 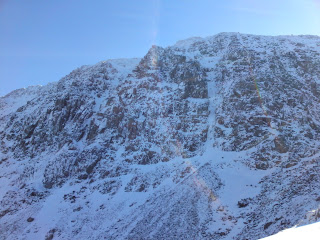 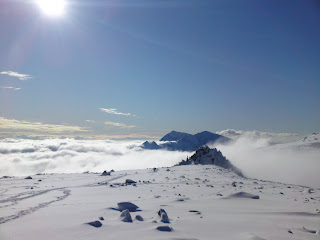 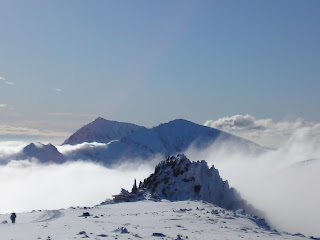 Was supposed to be off to climb Righthand Clogwyn today, but my mate had to cancel due to lack of babysitter & half term issues. So I was on my own.
Have had a bad back for the last few days so just thought I would go for a mooch up to Idwal & see how I felt.
Ended up heading up to Cwm Cneifion and doing Pinnacle Gully, then Right Hand Pinnacle Gully. Was feeling much more flexible by now, and the weather had just turned positively Alpine! Brilliant blue skies.
So dropped over the Gribin Ridge, and went over to Main Gully on Glyder Fach which is classed as a 260m grade II in the Welsh Winter Climbs book.
However when I got into the gully proper I discovered it was full of a LOT of fresh snow and felt extremely precarious & unstable. It is worth pointing out that I am no expert in avalanche assessment, but to me it felt risky.
So after the two crux moves, I moved right and climbed broken mixed ground to the summit. This felt much more like a grade II/III or more likely III. Had my heart in my mouth on a few occassions, but was just me being a wuss most probably!

When I arrived on the summit plateau I was treated to a fantastic inversion, and a most Alpine feel to the day. Crib Goch, Crib y Ddysgl & Snowdon were clearly visible poking out above the clouds.

So we have more snow in Snowdonia, and below zero temps forecast for the next 7 days or so. Could do with some thaw as well though to bring the snow into good condition.

For the time being be very careful out there.