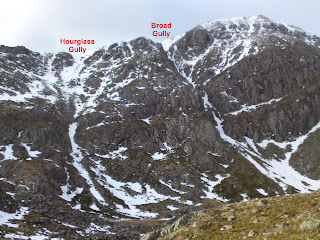 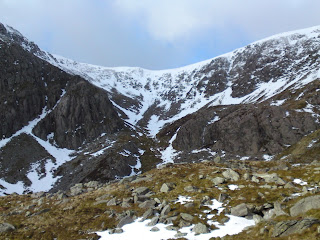 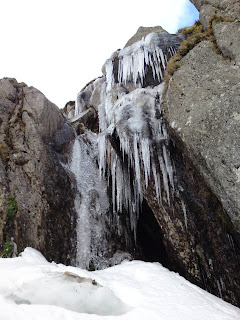 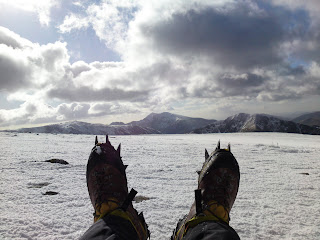 Beautiful day today in N.Snowdonia. Walked up to Cwm Ffynnon Lloer to have a look if anything on Pen Yr Ole Wen looked do able. Went for Broad Gully which was rock hard snow from botton to top. 3 interesting optional icefalls to play on too. The first one about 15m to the right of the start looked attractive with very impressive stalegtites, but on closer inspection it wasn't solid enough to climb, at least not for a big lump like me. 50m or so further up the gully was a nice section of grade
III ice which was in much better shape. Another 50 or 60m further again was an even better icefall which I promptly chickened out of. (I was on my own soloing after all!)
Top of Pen Yr Ole Wen weather was blue sky & completely still & silent, quite eery. Could quite clearly see Cwm Cnefion looking great again, I would imagine it is just getting better & better in there. Y Garn looks far more patchy, although you can make out (if you click on 'Snowdon between my boots' picture) A & B gullies, although they might just be a bit thin, hard to say.
From where I was it looked like Idwal Stream was once again frozen, and that the Devil's Appendix upper section was forming.