Dave , Neil and I walked into Idwal this morning in light snow and a definate warmer feel, with a light breeze. We had a look at the Screen which looked doable but it was thin and we thought gear maybe a little dubious. The Ramp looked good so we had go at that which had good ice where expected. Ice drips were freezing on our sacks so it was still well below freezing. Dave and Neil had to get back this afternoon, so we ran out of time to do anything else. Walked down past Devil's pastures which again looked thin but would go. There was a team on the Sting. Appendix looked complete, if not that fat! Met a party on way down that tried South Gully but said the ice was soft and wet on the first pitch. There was a team in Central Gully which looked to have good ice in the top pitch and also a team on the second pitch of South Gully. A few teams were tackling a snowy looking Idwal stream, it did look nice though. It was pretty busy as we left at about 1130. Looks cold maybe until Christmas Day so hopefull things get fatter through the week. Plenty to chose from tomorrow anyway! Didn't take many shots but have included one from the Ramp. 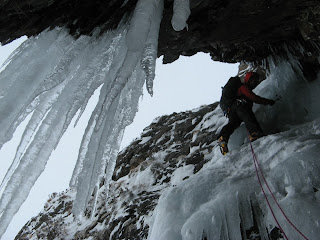