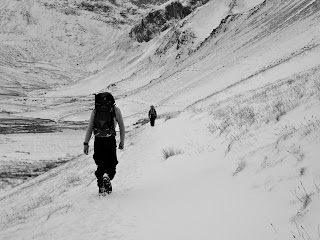 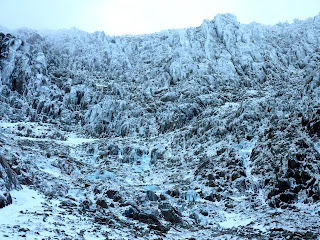 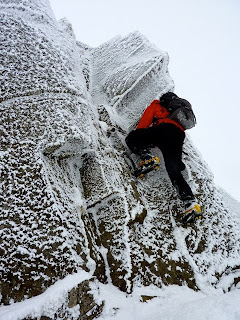 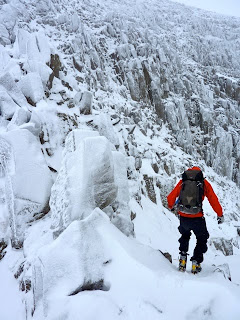 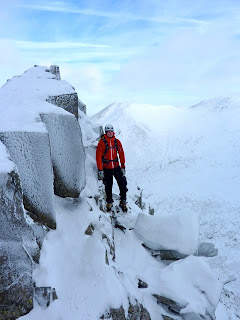 
Enjoyed the delights of the classic Crib Lem (Llech Ddu Spur) today. We were the first (probably only) group to break off the well-trodden Cwm Llafar highway to make tracks up this highly satisfying route; seems it's had little traffic of late.


A soft start with knee to thigh deep drifts at the base of Cwmglas Bach became somewhat thinner and trickier to negotiate on the traverse over to the crest of the spur whilst encountering occasional spindrift. Not wishing to chance noticeable wind scour on the spur proper, sensible and efficient progression demanded the use of our crampons and helmets from here on up. Ice axes stashed, we stuck true to a usual summer line including 'optional extras'; a thoroughly decent winter scramble presenting few difficulties.

With south westerlies gusting over the top, we were glad to have chosen this remarkably sheltered ascent up Carnedd Dafydd, whose summit proved reasonably hostile for prolonged loitering. Although still rare, some névé on northerly aspects towards the very top allowed for crunchier progress.


Our descent was back down the comparatively bare Cwm Llafar Ridge to Gerlan. Total time: 4.5 hours