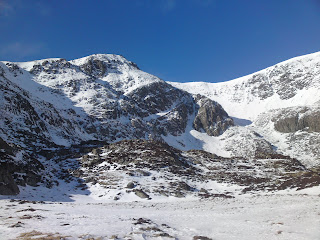 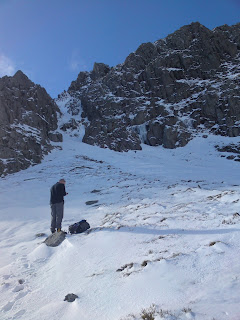 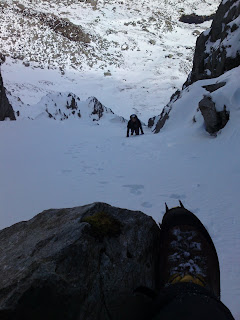 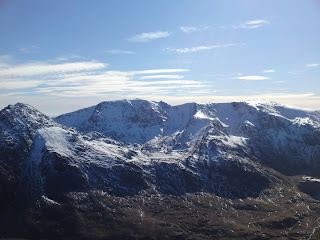 Haven't posted on here for a week, as I was in Scotland last weekend, and have only managed one day in Snowdonia this week which was yesterday (thursday).
Myself & Davey.C (who had been up all night working a 12 hour shift) took all our climbing pro with us intending to see if we could do a route to push our grade a bit, thought it was about time. That was not to be though as Davey was practically asleep when we arrived and my back & good old ankle injury playing up again. So leaving the rope, harnesses & pro in the car we walked up to Cwm Lloer, which is still in great winter nick. Its like another world when you arrive there, as the walk up besides the Afon Lloer stream was a very warm one. T-shirts & sunglasses job, with no snow to be seen. Then you arrive over the crest, to Cwm Lloer completely frozen over and full winter conditions around the cwm!
As you can see from the top photo all winter routes are in climbable condition. Hourglass Gully, Broad Gully, Moongroves, Left Hand Y Gully, Right Hand Y Gully & The Headwall all complete and looking good.
The snow condition was very varied in the cwm itself (and for the first half or 100m ish of Broad Gully). Ranging from icy crust with deep graupel underneath to powder to great neve. Although there was some evidence of avalanche debris around the cwm, including in Broad Gully, I would say it was several days old. In my opinion there was no avalanche risk when we were there.
From about the 800m mark, so halfway ish up Broad Gully snow turned to solid neve. There were some good ice falls on the right of the gully again, in fact much better formed than my previous climbing here a couple of weeks ago. If you were to include the 2 obvious ones in an ascent of Broad Gully (we did not this time) I would say you could class the route as a grade III/IV or maybe a straight IV. (The first ice fall is to the right of the gully start, and was about 6 or 7 metres of good vertical ice. The other one of note is approx 100m up the gully, and is a similar height, and also vertical.) Just doing a direct ascent of the gully line without the ice was a good I/II as the guide book would suggest.
It was yet another stunning day in Snowdonia, with brilliant blue skies, and blazing sun. I had my binoculars with me, and looking across to the Glyders from the summit of Pen Yr Ole Wen, Cwm Cneifion was again looking fantastic, as was the Gribin ridge, and the face og Glyder Fach. Idwal area was bare, although I would imagine there is still some ice to be found. The Devil's Appendix is not formed. Y Garn also looking great, A, B & C gullies and buttress & Banana Gully looking very well covered and enticing.
Posted by Andy Whitmore at 20:46