Cneifion Arete was not to be :-( 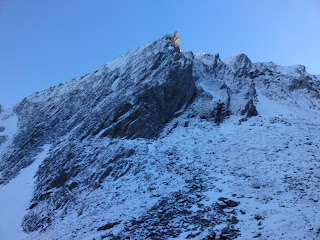 Due to extreme thawing all over the Snowdonian mountains at the moment, I thought today would be as good a day as any for the Cneifion Arete. Ive not done this climb before, but fancied it for a while.
Had hoped to be doing the route with a partner & pitching it, but that was not to be, so I was on my own but decided to have a go at soloing it anyway. Unfortunately cloud cover was so thick in lower Cwm Cneifion I started to have some doubts about my cunning plan.
However undetered, I found the base of the climb, and started up. Within about 5 mins (less probably) I felt very uncomfortable with the situation I was putting myself in & downclimbed.
Cneifion Arete goes at a winter grade III, or a summer scramble grade III with a mod/diff rock climbing grade initial pitch. Due to the complete lack of ice or snow on it today it would have been the latter.
In clear sunny condition on dry rock I am sure I would have had no qualms in bombing up it, but not today with zero vis, damp rock & blowing a decent old gale. So I chickened out! Next time...

So I went for a reccy of the Cwm instead. There is a major thaw on everywhere, and it looks very much like the end of the winter climbing season in Wales (unless we have a very cold snap or two very soon)
Did a unamed 80m gully on the flank of Senior's Ridge, which was barely climbable due to wet soft snow & cruddy ice, an easy gully though. Snow cover gets considerably thicker in upper Cwm Cneifion, but as you gain altitude if anything the snow gets worse. I was repeatedly sinking knee or even thigh deep in wet snow every 3 or 4 steps. Hard going. There was now absolutely no visibility & I was wondering what the hell I had bothered getting up at 5am for! In fact I could only see Clogwyn Du when I was within spitting distance.
There was definite avalanche debris around the upper cwm, some old, but some near Easy Route looked very recent. Also noticed large fracture lines appearing here & there in the snowpack. Take care!
I cannot comment on any of the climbs conditions on Clogwyn Du as I could not see them, but would imagine any ice remaining on say R & L Gullies would be in awful nick, although I did hear that they were both climbed yesterday (sunday)

So if it's no good in Cwm cneifion I would guess it's no good anywhere at all. (But please correct me if I am wrong, I would love it if I was wrong!!)