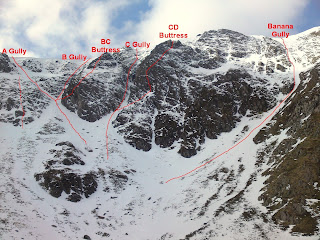 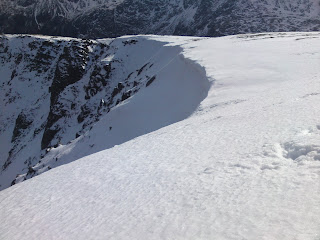 Out soloing on my own today (becoming a habit) Went up to Cwm Clyd (Y Garn). Firstly climbed slabs to the left of A Gully (see photo). Some good sections of ice & mixed climbing went at about a II/III at a push. Then dropped down & did B Gully on great neve snow all the way. Never done this one before and found it to be easy at the grade I/II. No cornice to speak of at the top (see photo), which disappointed me a bit as I was after a bit of adventure and would like to have done battle with one!! Then descended Banana Gully, which has a small cornice. Poor snow conditions in Banana, sugary collapsing snow apart from top 30m or so.

Top pic: Y Garn topo (dotted line to left of A Gully is the slabs I climbed)
Bottom pic: Lack of cornice at top of B Gully
Posted by Andy Whitmore at 21:58