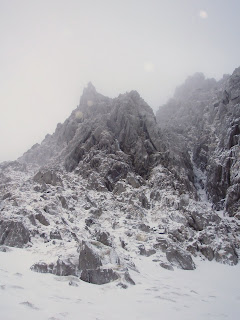 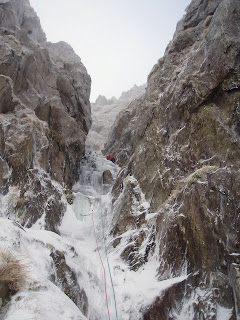 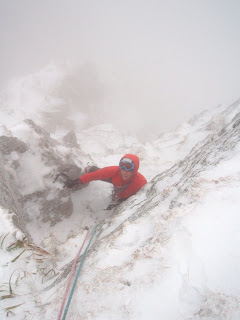 Thanks to Huw Gilbert at www.climbmountains.co.uk for the following info he emailed me.

"Andy made another long commute from Yorkshire today and he and myself headed up to Craig y Cwmglas Bach, high up in a north facing corrie on Carnedd Dafydd. We had an idea to climb a route called simply The Gully (iii/ii) and then walk across to the slightly higher Craig Dafydd and take a look at Goliath (iv/v). We were however way laid by the prospect of a new or at least seldom climbed route on the front of an impresive feature known as 'The Pillar'. The line is pretty obvious and follows a narrow chimney on the left side of the front of The Pillar joining with the crest after about 80m, you can clearly see the line on the crag diagram in the Winter Climbs Guide Book. The Pillar even gets a mention in the crag's opening narrative but no route is given. We did find an old peg at the base of the buttress but nothing was seen on the route. As for the route itself we climbed it in 3 pitches plus a rope length across the ridge which joins back to the mountain at the top. There was a fair bit of good ice in the chimney, pretty much a continuous line about a foot wide in the left corner. Via this and wide bridging we scratched our way up it, though we are both agreed that it was flippin hard which at our standard would logically put it at about grade V. The difficulty eases to IV after the first 15m or so. Just before the chimney line ends the ice runs out and the chimney overhangs, we dodged this by climbing steep turfy steps just to the left. Another steep pitch mostly on turf then leads to the top. As a prelude to our little adventure we did climb The Gully. It's an excellent little route, a deep and twisting line that was chock full of quality ice. Another point of note from today is that a layer of unstable windslab has formed at the top of the snow pack. The snow on the wider slopes at the top of routes felt a little 'off' under our feet. On carrying out a hand shear test it didn't take a much force at all for 9 inch deep slab to slide. Advice would be to be pretty cautious about venturing onto any areas of accumulated snow such as the approach to routes and the easier angled gullies."
Posted by Andy Whitmore at 22:47