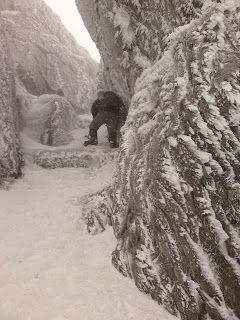 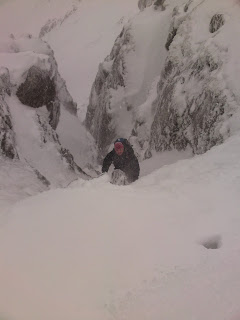 Despite only getting 1 hours sleep last night (sick children!), I managed to drag myself out the door at 5.30am and head down the A55 to Snowdonia with Davey.C.
Pretty awful when we arrived at Ogwen at 7am, varying every few minutes between heavy snow, terrential rain & killer hail, coupled with zero visibility. I felt tired & unoptimistic!!
However we mooched up to Cwm Cneifion (finding a great huge swathe of ice en route which we spent some time on practising step cutting techniques)
Very poor visibility in Cwm Cnefion, and if anything even worse at the base of Clogwyn Du.
However route conditions seemed excellent. We spoke to 2 climbers who were about to do Y Gully right hand direct & a team were also just starting on Pillar Chimney.
We did Hidden Gully, which was in perfect nick. The Easy Route start off was neve, and Hidden Gully itself was the same with also good ice, even if we did get constantly covered in powder snow pouring down the gully. Every single axe placement went in with a reassuring 'thwack'. A 'little gem' of a route, if only it were 5 times as long!
Near whiteout conditions on top, but easy enough to find our descent route, Gribin ridge. A lot of powder snow on the ridge, as it had been snowing most of the morning & apparently a bit last night too.
We spoke to a climber who had just done Main Gully on Glyder Fach who was raving about what great condition it had been in.
There had been a good 2 inches of snow fallen on the car when we got back to it, and Ive just heard it was still snowing 4 hours after we left Ogwen. Just worth bearing in mind that a good few inches of fresh unconsolidated snow will be covering everything.
Another great winter day in Snowdonia.
Posted by Andy Whitmore at 17:30