I managed to get a free afternoon yesterday (Thurs) & was at Ogwen carpark for 1.30pm. My objective was to head up into Cwm Cneifion to have a look at Tower Slabs, Tower Gully & Hidden Gully, although I was aware that reports were saying that snow was still unconsolidated due to continued cold temps & no freese/thaw conditions. When I got into the lower cwm it was fairly apparent that the snow was not going to be in good condition in the higher gullies, & I suspected Tower Slabs would be very poor. So opting for Senior's Ridge instead I headed up in poor snow which was fairly hard going at times. Crampons were essential due to sections of ice, and one axe was sufficient. When high up on the ridge I could see across the cwm & although there is some ice on the lower section of Tower Slabs, it has not yet formed properly. I came back down via the Devil's Kitchen path which was very icy, and had a look at the Idwal ice routes. I am aware that there was a couple of ascents of The Ramp & Idwal Stream yesterday, but from what I saw these are still a fair way off being 'in' condition. The Screen looked at best 50% formed, as did The Ramp & South Gully. I would say that Idwal Stream looked closest to being 'in'. Bear in mind that this was on Thursday & ice should be building daily.
It was a beautiful day to be out, and I am just disappointed it is my only oppurtunity to do so until at least next week. 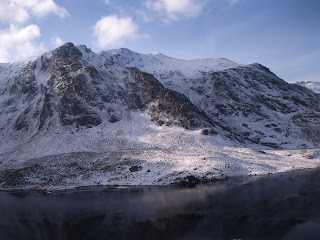 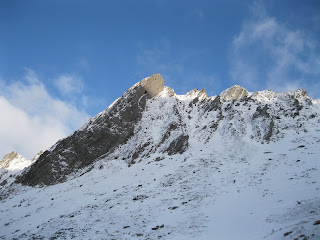