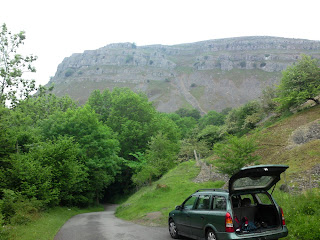 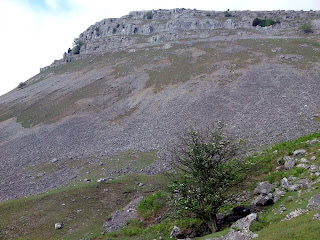 Today I met up with Woodsy from the UKC forum at Twilight Tower Buttress nr Llangollen on the Upper Tier . It had just stopped drizzling, and the rock was good & dry. There are some outstanding routes on this crag, and unlike other Clwyd Limestone climbing venues is not at all polished.
We managed 6 climbs which were: Sloth (V-Diff*), Pride (V-Diff), Helme's Highway (S 4a), Funeral Corner (HS 4a**), Loran (S 4a*) & Skullion (VS 4b).
The pick of the bunch was definetly Funeral Corner (HS 4a**) which to quote the Rockfax guidebook is 'A little gem situated high above the valley, at the top of Twilight Tower Buttress. A perfect corner which is a delight to climb. Just a shame it is so short'

Top pic: From the car looking up at the whole Twilight area.
Bottom Pic: Twilight Tower Buttress.
Posted by Andy Whitmore at 20:23