Sunday on The Glyders

I was out Sunday on The Glyders for the morning. Headed up the Gribin Ridge which provided some snowy/icy entertainmnt, but not a lot. Just enough for it to feel a bit like winter but not really enough for an axe or crampons. The Glyder plateau itself was completely white and frozen so I thought I would have a look at dropping down Easy Gully at the head of Cwm Cneifion and doing Hidden Gully, the short but sweet grade II (or is it I/II I can't remember?) gully to the left of Clogwyn Du. But there wasn't much snow on Easy Gully and the ground was soft so I popped around the corner to peek into the top of Hidden Gully where it was the same story. More snow but unconsolidated on top of very soft ground. I must admit I was still tempted to do it anyway in a spirit of 'well I'm here anyway so might as well' but I was a good winter bunny and acted in a responsible and ethical manner and refrained. Plus it would have been utter crap!
I was going to upload some pics but can't really be bothered as the temps are due to rise over the next few days so its all irrelevant. The one pic is top of the Gribin.
A couple of different lots of friends were out sat and sun in Cwm Lloer and upper Cwm Glas areas in the vain hope of finding something worth plodding up, but I gather it was the same story.
What we really need after this thaw is a good spell of freezing cold weather to get the ground good and hard before any snows arrive. We will see..... 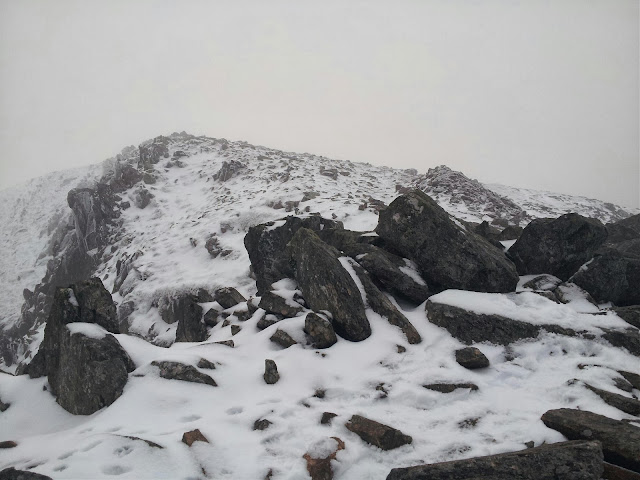