I've had all sorts of information through via email & facebook this last couple of days. There has been a lot of climbing going on, and here are a few reports:

My new friend Stephen Davo Davies has been out this week. He sent me the following info and pics about yesterday's fun on the ice:

'Me and James Williams did the ramp yesterday morning which was in good Nik & wasn't smashed to bits to be honest, it was quite thick all the way to top "could av got a 130mm ice screw in everywhere!" There were places that were thin ie.. On raised rock areas that hat been tried for an axe hold so thee must be some blunted axes about lol. We started Devil's pasture @ 3pm with James Williams leading up & me 2nding I found it quite easy, & lots of hard thick ice all the way up to bottom of chimney, there were also visible signs all the way up of thinner ice being broken to reveal rock face but where do you draw the line on distinguishing brittle thin ice to being ready! Only the tapping of the ice will determine that outcome! There was some pockets of frozen turf all the way up Pasture but try & keep away from those to be honest! There were lots of previous axe placements which were good for both axes & crampons, saved smashing more holes!! Got to below chimney then it was a 10 meter mixed rock/ice up through chimney then a plod through thick snow to top out & bag up the ropes! On the way back down there was 2lads venturing up the Pasture & a couple half way up the Appendix via head torch. Got back to car @ 5.30pm Brilliant day & not to busy to be honest. I think the meaning of in or not depends on the ethics behind your climb when you get on the route, if ya can follow a previous lead line of formation the chances of damage are minimal. The group above us doing the Pasture before James started his lead, there was all sizes of ice coming down from 10 penny size bits to saucer sizes, don't know what the hell were doing, considering it was my 3rd ever ice climb, I didn't knock anything off!!! Just depends I suppose! Good luck if anyone's out today.' 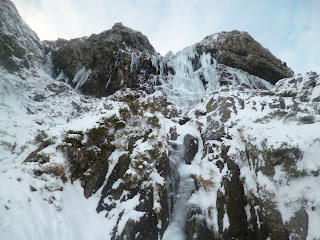 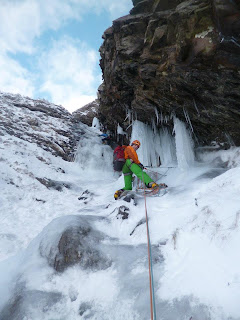 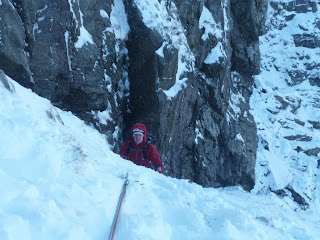 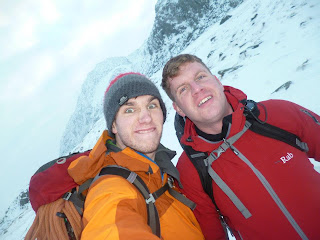 Congratulations to Misha who along with his partner climbed this winter's first ascent of the Devil's Appendix on wednesday, apparently a life long dream of his!

My friend Carl Davies has been out 3 or 4 days consecutively this week and has climbed on The Black Ladders, Clogwyn Ddu and on Idwal Ice. He'll be emailing me later with reports and pictures. Thanks Carl ;-)

Although its way out of the reach of most of us, a new route (Wales' hardest?) Lateo X 10 was completed last Tuesday by Pete Harrison and Tom Livingstone on Clogwyn Ddu. Then had its second ascent just 5 days later by Dave Garry and Tom Livingstone. Read all about it on Dave Garry's blog and the V12 blog
Posted by Andy Whitmore at 13:01