Going winter climbing has become a bit of a tradition on Christmas Eve the last few years, so despite the lack of winter conditions around at the moment I thought I would at least go for a walk this morning. There is still some snow high up, particulary on NE faces. I had a wander up to Cwm Clyd as this is where the most snow cover appeared to be to have a look if any of the easy gullies (A,B or C) were vaguely anything like in condition (I was 99% sure they wouldn't be) I did go up A Gully which was the only one which had snow cover (albiet a thin strip!) from bottom to top, but snow conditions were mainly crappy. Better from around 800m or so, but not worth it really. No crampons were worn & I used one axe as a walking aid before anyone moans at me about turf damage! :-)

So here's hoping the new year will bring some freezing weather & snow!
Have a very Merry Christmas. 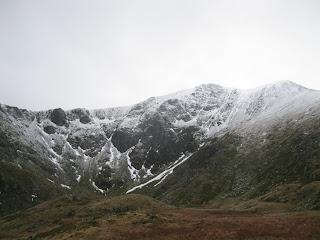