OK, so winter not QUITE over yet!! 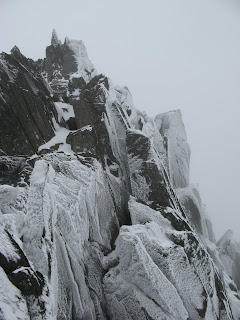 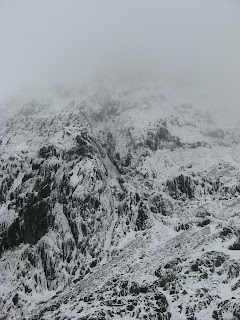 So we are now into our SIXTH MONTH in a row of winter climbing in Snowdonia!!


I have just had another report in from Carl D (who seems to pretty much LIVE in the mountains at the moment!!) Thanks Carl

Just switched on phone and got your text. Went up Crib Goch in the end, I did put a post on the UKC forum. It was OK (I think we've been spoilt) but snow was powdery on the first half so lots of crampon scraping! There's alot of snow about and the windblown drifts are over a metre in places. The second half of route on the approach to Crib y Ddysgl is better snow with plenty of old snow which is bomber rock solid neve. Rimeing on the north side of Crib Goch. I was going to do the horseshoe but with all the soft snow about the whole route was pretty hard work so I came down via the Pyg track. In places the snow is consolidating so it could be better after tomorrow. There's ice starting to form in the drainage above the Pyg. Interestingly a snow bank probably over a metre deep had avalanched off wet grass, across the Pyg path, just before junction with Crib Goch track, lots of debris. The Trinity Gullies look full of snow so could be good in couple of days. Looks like a little warmer tomorrow then colder Sat/Sun. Going to work tomorrow then going to try and get out on Sat and Sun. Winter isn't over yet!
It was pretty closed in so not many pics, one of the rime on the ridge and one of great gully on the way down.